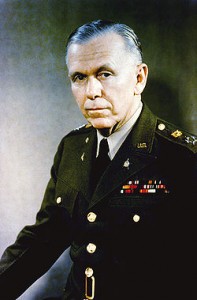 George Marshall was a truly great American leader.  Credited by Winston Churchill as the “organizer of victory” for his leadership of the U.S. Army during World War II, he also was awarded the Nobel Peace Prize for spearheading the Marshall Plan as Secretary of State.  Marshall also owns my favorite quote about leadership.

“Gentlemen, enlisted men may be entitled to morale problems, but officers are not.  I expect all officers in this department to take care of their own morale.  No one is taking care of my morale.”

This quote has been interpreted historically in different ways.  One newspaper columnist recently wrote that this quote symbolizes an old style of leadership.  His argument is that leaders today need to be human and that openness and approachability are critical characteristics for those who want to be followed.  But I get something different from this quote.  To me, Marshall is saying simply:

If you want to lead people, stop whining.

Now let me be clear, I can whine with the best of you.    I come from a long line of whine aficionados.  Indulging in a good whine takes a load off.  I can think of 100 things to whine about at work and at home.  But I agree with Marshall: If you want to lead people, stop the impulse to complain.

Whining isn’t fair to those who work for you.  It makes you look bad.  It sours them on the organization.  It empowers them to whine.  You can still be open, accessible, and “real” without complaining.  You can keep a positive attitude about your workplace and still address hard problems and hard times.

Being a good leader is unnatural in important ways.  It requires fighting against the natural impulse of lifting yourself up by putting others down.  It asks you to be constructive, rather than destructive, in an organization that may be and often will be off track.  Next time you are ready to unload to a co-worker or someone who reports to you, think back on this quote.  It has come in handy for me more than once.

[As an aside, the quote is from David McCullough’s Truman, winner of a Pulitzer Prize and one of the best books on leadership.]